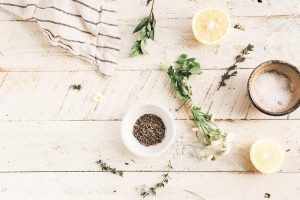 What is herbal medicine?
Herbal medicine, also called botanical medicine or phytomedicine, refers to the use of any plant’s seeds, berries, roots, leaves, bark, or flowers for medicinal purposes. While the scientific study and medicinal use of herbs began in the eighteenth century, documentation of the early practices of the people of Egypt, Greece, India, and Asia demonstrates a sophisticated understanding of herbs and their uses from well over a thousand years ago. Centuries later, settlers in North America gleaned much of their herbal lore from Native Americans. For example, black cohosh tea has been used in Native American cultures for centuries to soothe menopausal symptoms. Although a renaissance is occurring in herbal medicine in the United States, the Food and Drug Administration still classifies herbs as dietary supplements and forbids manufacturers to claim that their products are able to treat or prevent specific diseases. Europe, however, is another matter. In Germany, for example, herbal preparations are regulated as drugs and an expert medical panel, known as the German Commission E, actively researches their safety and effectiveness.

Who is using herbal medicine?
Nearly one-third of Americans use herbs and it is estimated that in 1998 alone $4 billion was spent on herbal products in this country. Unfortunately, a recent study in the New England Journal of Medicine indicated that nearly 70 percent of individuals taking herbal medicines (the majority of whom were well educated and had a higher-than-average income) were reluctant to reveal their use of complementary and alternative medicine to their doctors. Because herbal medicines contain a combination of chemicals, each with a specific action, many are capable of eliciting complex physiological responses-some of which may create unwanted or unexpected results when combined with conventional drugs. Be sure to consult your doctor before trying any herbal products.

Are there experts in herbal medicine?
Naturopathic physicians and practitioners of Traditional Chinese Medicine (TCM) all use herbs to treat illness. Naturopathic physicians believe that the body is continually striving for balance and that natural therapies can be used to support this process. They are trained in four-year, postgraduate institutions that combine courses in conventional medical science (such as pathology, microbiology, pharmacology, and minor surgery) with clinical training in herbal medicine, homeopathy, nutrition, and lifestyle counseling. TCM practitioners are considered the experts in Chinese herbal medicine. Thousands of years of empirical data has created an elaberate and highly effective system to create formulas based on the individuals unique symptoms. Modern research affirms on the molecular level the reasons why these traditional herbs are so powerful in the treatment of most conditions.