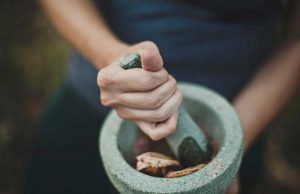 What is homeopathy?
In the late 18th century, a German physician named Samuel Hahnemann was frustrated with the contemporary practice of medicine. Then, he came upon a passage claiming that Peruvian bark cured malaria. Using himself as a subject, Hahnemann swallowed a dose of Peruvian bark, which contains quinine. He began to feel feverish, drowsy, desperately thirsty, and agitated-all of which he recognized as symptoms of malaria. This caused Hahnemann to experiment further and form his theory that like cures like. Soon, he coined the term “homeopathy” from the Greek homoios, meaning similar, and pathie, meaning feeling. One of the basic principles of homeopathy is that when a substance in large doses causes certain symptoms, in small doses it can help heal a person suffering from an illness that has those same symptoms. Some treatments in conventional medicine rely on this like-cures-like principle: vaccines, for instance, introduce small doses of an illness-causing agent to cure or prevent disease.

How does homeopathy work?
Rather than simply suppressing symptoms of a disease, homeopathic remedies act as catalysts that aid the body’s inherent healing mechanisms. It is known that any physical disease has a mental and emotional component. The right remedy for a particular condition addresses all of these aspects. Homeopathic remedies start with simple substances, such as herbs, minerals, or animal products. These substances are first crushed and dissolved in a specified amount of grain alcohol or lactose, mechanically shaken (a process called “succussion”), then stored. This is the “mother tincture.” Homeopaths further dilute tinctures with alcohol or lactose, either 1 part to 10 (written as “X”) or 1 part to 100 (written as “C”), and succussed, yielding a 1X or 1C dilution. Homeopaths can even further dilute these tinctures two times (2X or 2C), three times (3X or 3C), and so forth. In clinical practice, you may use any dilution, but the most popular for self-care are the 6X, 12X, and 30X and 6C, 12C, and 30C.